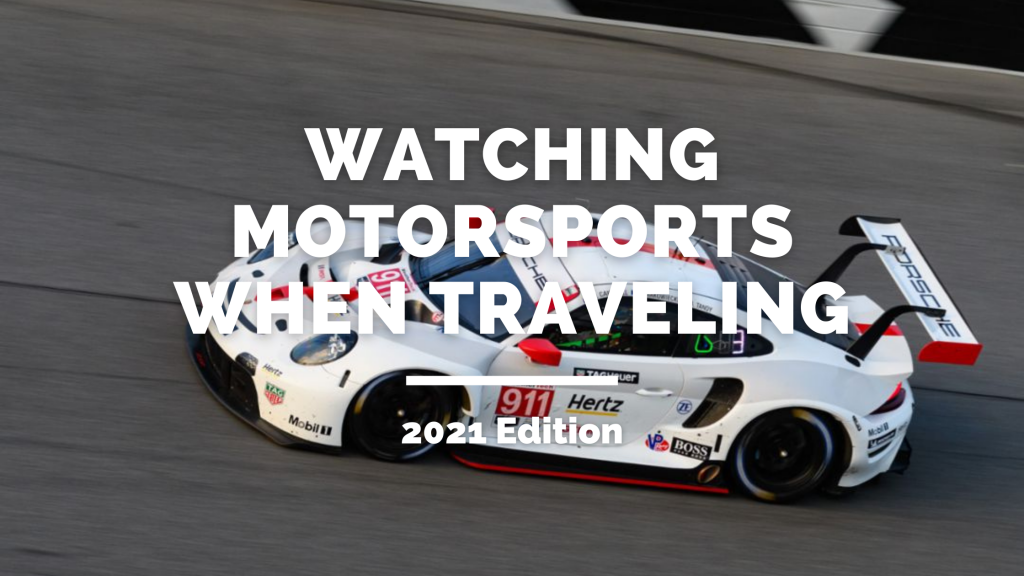 Catching your favorite car race and motorsports events when traveling can be difficult. Most hotel and Airbnb TVs only include basic cable. And if you get your motorsports via streaming it can be even harder. On top of that, most hotel internet TVs or Airbnbs don’t have the services needed to watch.

If you are willing to invest just a little bit of effort you can catch nearly any race live while traveling. You only need a few things to make this happen thanks to the power of streaming.

In order to effectively stream while traveling you need three things. First is a streaming device. Many Airbnb’s will include Internet TVs, Rokus or Fire Stick TVs. Also, many hotels offer internet TVs.

However, there are few things to consider. First, most motorsports streaming requires a special app. You may find most internet TVs at hotels or Airbnbs don’t have the apps. Second, you may find its not entirely secure to enter your username or password into a TV at a hotel or Airbnb.

The best option is to bring your own streaming stick or other streaming device when traveling. This ensures you have access to the apps needed to catch races on the go.

The best part is you won’t need to enter a username and password at each different hotel, RV park or Airbnb. If you travel regularly this is a huge advantage.

TV With HDMI Port and Power

When you have your own streaming stick you just need a locate the TVs HDMI port. You then just need power for your streaming stick. We’ve got a handy guide for both in case it isn’t obvious for HDMI input and power.

Lastly we highly recommend a travel router. While some streaming sticks will work with hotel or RV park WiFi, many will not due to the captive portal. Captive portals are the screens you see where you have to enter a code, room number, name or other information.

A travel router will help you bypass captive portals for devices that don’t work with them. Even better it will allow you connect all of your devices onto the hotel, RV park or Airbnb WiFi without setting them all up again. You can even bring smart home devices such as a Sonos or Apple Home Pod.

How To Stream Motorsports When Traveling

Cost: Included With Your Cable Subscription

Key races are also televised on NBC, as well as USA Networks and CNBC.

IMSA officially partners with NBCSN for both TV and streaming. You can watch IMSA WeatherTech series using NBCSN’s Trackpass serivce for $20 for the year or $2.99 a month for just the IMSA series. You can also get the “All-Access” pass which includes NASCAR, ARCA, Whelen Modified and American Flat track in addition to the IMSA races.

Key races are also televised on NBC (including the Petit Le Mans), as well as USA Networks and CNBC.

Where: F1 TV Pro, ESPN (with subscription and via a service that streams ESPN),

ESPN is the official US TV provider of F1 thru 2022. In addition F1 offers their own direct OTT offering for $79.99 annually.

IndyCar officially partners with NBC NBCSN for both TV and streaming. You can watch all of the remaining Indy Car series using NBCSN’s IndyCar Pass. However, don’t confuse this with the Track Pass, which is a separate service.

Key races are also televised on NBC (including the Indy 500), as well as races on USA Network.