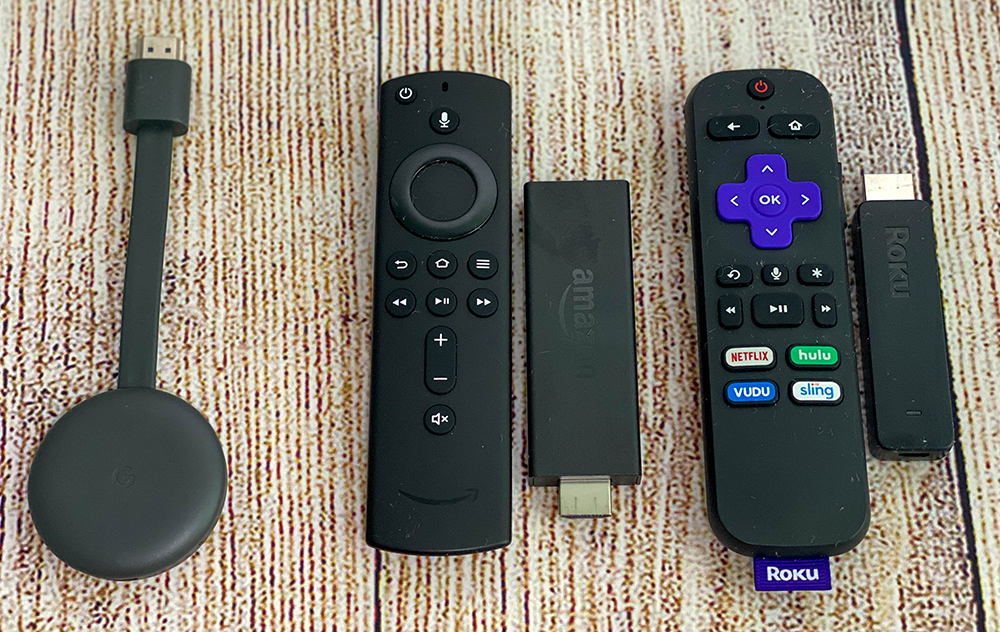 As anyone who travel regularly knows – most hotels and even many AirBnb’s leave a lot to be desired when it comes to streaming entertainment options. Even when streaming is offered there are likely only a few select services and others may require you to put in your own username and password.

One of the most popular ways to solve this problem is to take a streaming device with you. Relatively cheap prices ($40 or less in many cases) plus the fact that so much entertainment is now consumed via streaming make this option more viable every day.

But not all streaming sticks are equally equipped for hotels and AirBnb’s. It’s possible the platform you are use to at home may not work easily on the road. We’ll break down the top streaming device options and consider the features that are a must for travel.

We should note that although a more expensive 4K version exists we did not include it in the price. Since most hotels and AirBnb’s only have 1080p TVs we didn’t include 4K versions unless the features made it significantly more compelling for travel.

Additionally there are lots of other great streaming devices available. Apple TV 4K+, Roku Premiere and Xiamoi Mi Box, Nvidia Shield. However, given the size and price we didn’t consider these “travel” streaming sticks.

This is an important consideration. Some devices, like the first three versions of the Chromecast, generally require the device to be on the same network as the controlling device. While the Google Chromecast has work arounds available, the straight forward configuration does not work on hotel WiFi. The hotel WiFi is usually set up to limit the ability of different devices to talk to each other as a security precaution. In the case of the those early Google Chromecasts you’d need to re-do the setup in order to get it on the hotel WiFi network.

Some AirBnb networks have limitations, but generally not as limiting as hotel WiFi. While Google Chromecasts are not generally viable for regular hotel stays, they can be quiet good for AirBnbs. They make even more sense if you visit the same AirBnb regularly or stay longer periods of time.

The Roku, Amazon and 4th Gen Google devices generally will work with most hotel and AirBnb WiFi networks.

Another consideration is whether they support captive portals. What are captive portals? They are the popups you get that prompt you to login or provide additional information prior to using the Hotel, AirBnb or other locations WiFi. Captive portal is generally not a concern at most AirBnb’s, or when you are taking your streaming stick to your parents house. However, for regular hotel travelers they require consideration. Few hotels allow you to use their WiFi without accepting terms and conditions, entering a room name, an additional password screen or other consideration.

The Roku Streaming Stick does have a feature that allows you to use another device such as a phone to help get the Roku Streaming Stick through a captive portal. It’ll prompt you to indicate whether you are at a hotel or dorm room. It will then provide you with a unique URL to use. This is a sufficient, though cumbersome approach. Still, combined with Roku’s other strengths and broad app support still makes this a great choice.

The Amazon Fire TV stick and the 4th Gen Google Chromecasts supports captive portals. While a few these devices will still struggle with some portals, the vast majority of work just fine. The only real downside is if the captive portal requires a lot of information it can be clunky to enter via the remote keyboard. That being said, given the even clunkier or flat out non-support for captive portals by it’s competitors, this is still the best choice.

Something rarely discussed by non-travel sites is the automatic remote config. While at home this is a one time thing, at least until you buy a new TV. However, when traveling each new location has a new TV. If you want to be able to use a single remote to control the volume and power on your TV and your streaming stick, you’ll likely want a device that can automatically detect the TV.

For the devices that have this feature, all you need to do is connect via HDMI to a newer TV. Most TVs since 2016 support identification via HDMI that the supported devices can use to configure the remotes.

The 4th Gen Chromecast, despite including a remote, does not support automatic remote config. You can configure the new Chromecast to control the hotel room Tv, but you must do it manually. Since the early Chromecasts do not have a remote, it obviously does not support this feature at all.

The Amazon Fire TV Stick and the Roku Streaming Stick however both support this feature. If the sticks are configured, you can use them to detect the TV and control it’s volume and power features without needing to enter any codes or identify the TV model yourself.

One pro for the Roku here is that it will automatically detect the new TV you plug into, without needing to enter a configuration screen. The Amazon devices will detect the model of the TV, but you still need to go into the config to tell it check.

In addition to potentially connecting multiple devices more quickly, it enables nearly any type of device to work with the hotel or AirBnb WiFi. As an example, while a Google Chromecast wouldn’t work with most hotel WiFi networks it would easily work with a travel router in the same hotel.

Travel routers also can help make your internet use at these locations a lot more secure. Plus, you usually will only need to complete the captive portal once for all devices, rather than having to connect them individually. And you can do the captive portal on a phone or laptop so you don’t need to use the device remote.

While some cheaper travel routers are fairly difficult to use, if you have a little technical know how they can make your entertainment life on the road better.

The best travel routers, however, are extremely easy to use, have built in security and will help make your streaming more reliable. Hotel and Airbnb WiFi is notoriously spotty. The right travel router can help smooth out the internet, which is vital for streaming.

If you do decide to take a streaming stick with you while traveling you may find the following blog posts useful. They cover dealing with power, TV inputs and if you run into issues with the captive portal.

Finding Power For Your Streaming Stick In A Hotel – Many hotel rooms don’t make it easy to find power sources for your streaming stick. Here are a few tips and tricks that may help you.

Changing Input On Hotel TVs – many hotel TVs don’t make it easy or obvious how to change the input on the TV. This guide will provide a few tips and tricks.

Resolving Issues With The Captive Portal – you may still encounter a situation where you cannot scroll, browse or enter information into a hotels captive portal. Here are a few tips and tricks to bypass the captive portal.

If you routinely travel with a streaming device, like a Roku, FireTV stick or Chromecast/Google TV, you may be interested in something that will make it easier to use. While you can certainly setup the streaming device at each hotel, along with your phone, tablet and laptop, you may also realize this is a lot of steps. In addition, hotel and airbnb WiFi are notorious unreliable, which can be streaming a hit and miss affair. You may also want some help to secure any type of public WIFi.

If you’ve dealt with any of these common issues, you should take a look at a smart travel router. Smart travel routers will streamline connecting all of your devices, getting through any needed hotel login or captive portals and even make that poor WiFi more reliable for streaming. The best part is, with Go Connect’s travel WiFi products the interface is so easy you’ll be online in minutes. And anyone in your family can do it.

Devices, A Winner and Conclusion

The Amazon Fire TV Stick is the clear winner in terms of price to features for travel. It’s $10 cheaper than the Roku and Chromecast with Google TV. It also natively supports captive portals at least as well as any device on this list. You can use it in most hotels with no additional devices or configuration.

All of the recent variations of the Amazon Fire TV stick will work the same for travel.

There are certainly some flaws with it, such as not all services are available on it and some people have a moral difference with Amazon’s business practices. We recommend the Roku Streaming Stick as a second choice. Other than the better captive portal support and the slightly higher price, the Roku is a more than capable travel streaming stick.

We also recommend giving the Google Chromecast with Google TV a look. It’s highly competitive. While some features like the casting still don’t work without a travel router, its a great device if you are embedded into that eco-system.

The positive experience with a Chromecast for travel is limited to the latest 4th generation version. The previous generations are a mixed experience. Casting doesn’t work on most hotel WIFi networks, and because the earlier versions of the Google Chromecast don’t have a user interface without casting, they don’t work. They also do not support captive portals at all. While there are a lot of potential work arounds available, we find using another device or sticking with the latest version for travel is the best bet.

While we didn’t explicit compare the Apple TV+, NVidia or other Android/Google TV because they are not generally small enough to be considered “travel” devices its worth noting they can be used for travel.

The Apple TV+ will definitely need a travel router or similar device to help deal with captive portals at hotels. The interface simply has no native capabilities to display it.

For newer Google TV based devices, like the NVidia Shield, they will work with hotel captive portals. Though like the Chromecast, the casting feature may not work due to hotel WiFi security.

If you are having trouble reading the chart above because its an image, below is the text version of the chart.

* included browser does not work with all captive portals. If you have issues, see our blog post on resolving issues with captive portals while traveling.

Update: We added the 4th generation Chromecast to the chart.