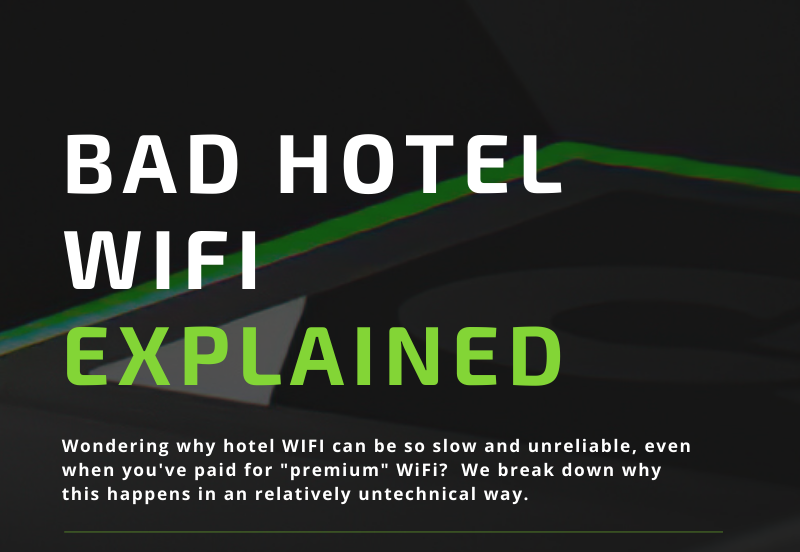 Ever wondererd why hotel Wifi can be so slow and unreliable, even when you’ve paid for “premium” WiFi? Given it’s 2020 its a little surprising how common regular travelers experience slow or unreliable hotel WiFi.

We break down why this happens in an relatively untechnical way. We also look at some of the solutions available on the market to help you.

Why Hotel WiFi Is So Bad?

Just like traffic on the road, WiFi traffic consumes a certain amount of of the available road. Also, just like rush hour traffic when more people are on the road the slower things go.

While this is a simplification of the technology behind it, for the average person the analogy works. However, there is more to what makes hotel WiFi slow or inconsistent.

WiFi Bandwidth – Its The Speed Limit

WiFi and internet performance are routinely talked about in terms of speed or bandwidth. The challenge is that only refers to the “speed limit”. It rarely addresses the factors that deal with how fast you’ll actually go.

As you may already know, just because you have lots of available “speed limit” or bandwidth it doesn’t mean you get to go that speed.

Having the ability to go faster doesn’t help when there is congestion on a limited number of lanes. It’s like being stuck behind slow moving cars blocking all of the lanes. It doesn’t matter how high the speed limit is if you can’t go any faster. Most hotel WiFi suffers from congestion, not necessarily due to Speed Limit.

This challenge isn’t unique to hotels. Anyone who has tried to get good WiFi in an apartment or condo knows, crowds of both users and other WiFi networks has a substantial impact on reliability.

Hotels WiFi specifically suffers from congestion. There are actually a few specific reasons why hotels tend to suffer from congestion regularly. They are often designed that way.

Hotels have only so many devices that broadcast and handle WiFi connections. They are known as access points. They are designed and placed by the number of rooms, and historically with the assumption of 1 device per room.

Given most people know travel with 1-2 devices per person, you can easily do the math and figure out how quickly these WiFi access points could get over crowded leading to poor Hotel Wifi.

Your laptop or phone generally pick the closest access point because it has the strongest signal. The challenge is, hotels often fill rooms near each other first. So even if the hotel isn’t crowded the access points can get overloaded with traffic, or in our analogy, cars in the lanes.

Even With Plenty Of Bandwidth It Can Be Slow

There often is more bandwidth available out of the hotel. The problem is you are bottle-necked trying to get past the traffic ahead of you. Just like getting stuck behind construction or merging lanes on a highway it slows you down.

Many hotels have taken advantage of the availability of higher bandwidth connections. However, this has not resolved many of the bad hotel WiFi challenges. It is much harder and more expensive for hotels to replace and re-engineer their access points. In order to do it correctly they must redesign it for the number of devices users actually travel with.

It Degrades At Busy Times

You may also have noticed the WiFi was great when you first checked in, but as the evening went on it got slower and slower. Hotel WiFi almost always degrades during popular times, which for hotels is in the evening (8-11pm). This is generally when a large number of people are working and streaming TV.

Other Causes OF Bad Hotel WiFi

There are still a number of other causes of bad hotel WiFi. While congestion is far and away the most common, you hotel might have low bandwidth or poorly installed and designed systems.

Find A Hotel With Good WiFi

The most common solution is people try to find hotels that are newer or specifically have good WiFi. While this is great when you have a chance, it’s not always viable. Also, because of the nature of congestion that we describe above- just because someone had a good experience at a hotel doesn’t mean your experience will be good.

The good news is Hotel WiFi is generally getting better over time.

There are number of software packages and devices that can help you improve performance. They can help you optimize your connections and prioritize the traffic that is important. For example, if you are streaming a show and sending email, they can optimize the traffic so the email doesn’t impact the stream when there is a relatively poor connection.

A travel router can help improve your WiFi security, and the best of them can actually help improve the connection. The Go Connect, for example, specifically helps improve the stability of connections in places like hotels without any special software, configuration or technical expertise.

The best travel routers also have built in VPN support. If you are not familiar, VPN helps add an additional layer of security. While hotel WiFi security is better than it once was, its still important to be mindful of WiFi security risks.

Speedify is one of the most popular options available. It’s software that can run on your laptop or phone to help improve your WiFi connection. It also includes built in VPN for added security.

The problem is you need to run it on each of your devices. If you have a lot of devices that can be a lot of keep up with. If you travel with your kids or less technical family members it can become a real burden. It also requires you to take action on each device. Travel routers will be a better choice if you routinely travel with more than 1 device (laptop and phone for example) or multiple people. However, if you just use a laptop or phone when traveling software like Speedify is likely a great choice.

Whether a standalone device or just the personal hotspot on your phone this is quickly becoming the top choice to solve the problem. It’s a good choice for the occasional traveler with an unlimited package and low to moderate usage.

The challenge with cellular hotspots for regular travelers is that unlimited plans rarely are truly unlimited. Most major carriers give you even less than available bandwidth before throttling with hotspots.

Also, hotspots tend to struggle to handle more than a few devices. So in addition to lots of bandwidth usage they tend to begin to suffer from their own form of congestion. So if you travel with more than 2 devices or consume a lot of bandwidth its ideal to use WiFi available.

Finally, technologies like 5G (and even 4G) don’t work as well in buildings. So while the hotel WiFi may be unusable making your hotspot a good alternative, don’t expect to consistently get amazing speeds.

A travel router with built in cellular connection, or the ability to use your phones hotspot as a backup is a great option to be able to use the best connection available. Plus, it will help you avoid needing to reconfigure all of your devices each time.

These are becoming less and less common, but if you have a laptop or a travel router with an Ethernet port you can use it to connect. Hardwired connections generally do not have many of the congestion problems WiFi does. While it is possible the hotel still may not have a lot of bandwidth, its not typically the primary problem.

The biggest challenge relying on this to be your solution is they are becoming less common. Specifically in newer and more value oriented hotels, most chains just don’t believe there is value in continuing to put Ethernet ports in. Installing WiFi in a hotel is a much easier and cheaper approach.