Streaming To A Portable Projector

Streaming To A Portable Projector 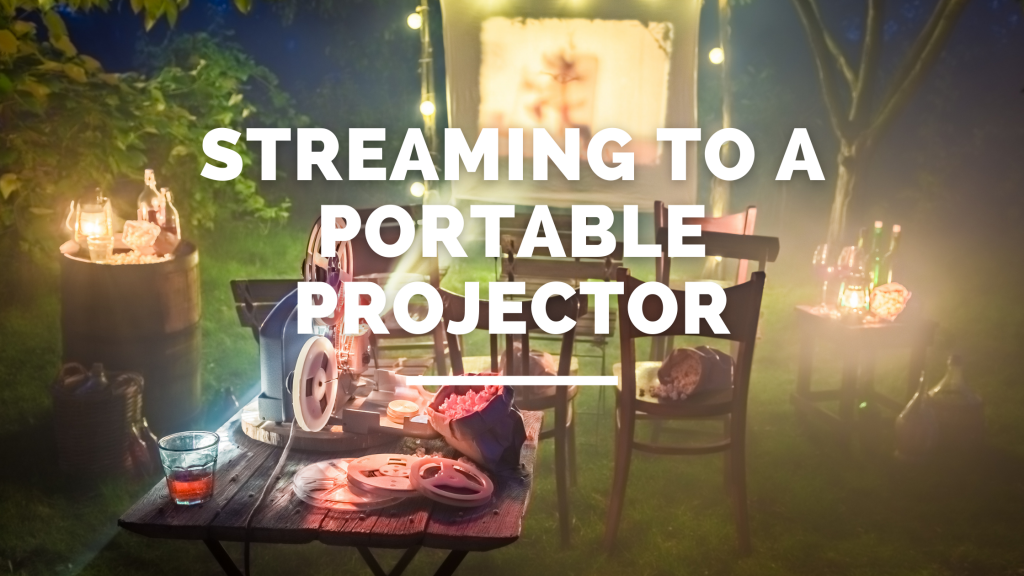 Streaming as a form of entertainment is everywhere now. In our homes, on our phones and tablets when on the go, in RVs, in our vehicles and even when camping. When you want to share your streaming experience somewhere without a fixed screen and a small tablet or phone won’t do there is the latest trend in streaming on the go: Streaming to a projector.

Popularized by group camping, but quickly finding a home amongst back yard or cul-de-sac parties and tailgaters, projecting movies and sports is a great way to gather. And with the fact that the majority of American’s get their entertainment via streaming it’s not surprising that finding a way to stream on the go or at home has increased.

In order to stream to a portable project you need a few key items.

Let’s dive into each of these.

While the features can vary greatly with a portable projector they have one thing in common: smaller size. They generally vary from the size of a book to as little as something that fits in the palm of your hand.

If you are planning on taking the project in your carry on bag, finding the smallest project is a huge factor. However, for most other uses like camping, tailgating or backyards we recommend putting this lower on the list. Micro portable projectors may compromise other features that are vital to the experience.

One of the most important features is finding a portable projector with high brightness, or lumens. If you are going to be somewhere you will be watching with a lot of ambient light – such as a room during the daytime or backyard during the day (or even evening) then you’ll need a projector that can put out a lot of light to help over come the ambient light.

Even if you are going to be using your projector in a vary dark place, like camping or dark room, the picture may not appear as sharp if there isn’t enough brightness.

Connections are also important when selecting a portable projector you want to stream to. Most projectors sold now will include an HDMI port, which is critical. So if you are picking one up second hand, make sure it has it. We also highly recommend enduring it supprots HDCP. HDCP is a copy projection feature of newer HDMI ports. Most streaming devices required HDCP or at least will limit quality without.

Resolution matters when it comes to a projector. There are lots of numbers and phrases tossed around. Most resolutions are similar to what you’d find when shopping for a television such as 720p (HD), 1080p (Full HD), 4K (UHD). However, you may also find resolutions expressed similar to monitors.

What’s most important is that you buy a projector with a resolution you understand and works well with the size of the screen you’ll be projecting on. Many portable projectors are smaller and less powerful, so 1080P is common. 1080P is great for screen projections up to about 80″. Bigger than that, 4K will really help.

Likewise, below a 65″ projection you won’t likely notice the difference between 4K and 1080P so you can consider saving some money on the projector and streaming device.

The actual resolution you see will vary based on a lot of factors, including the speed of the internet and the source material. 4K is pretty common in streaming but not universal. Some streaming devices don’t support 4K either.

Portable projectors are often used places where power is limited. In these instances you’ll want to make sure your projector consumes as little power as possible, is USB powered or has a built in battery.

Something To Project On

Of course you’ll need something to project on. Unlike a TV which contains the screen, you’ll need to bring a screen with you. The options are endless. Some are easy and free, but may impact the quality.

Projecting On A Wall – There is a big enough blank wall that is flat, and preferably white, you can simply projector on a wall. A high lumens projector will generally do a solid job without any specialized screen. The best part is a wall is free.

Projecting On A Sheet – A favorite amongst connected campers, a clean solid white sheet makes a decent screen. Attach it to a couple of trees and project away. No big screen to bring with you and packs up easily even if hiking into a camp site. Plus it costs nothing if you already have one, or is pretty cheap to buy.

An Inflatable Projection Screen – The most popular among the backyard and tailgating crowd an inflatable projector is a great choice when you need high quality and size, but portability. Much like an air mattress they inflate quickly and can grow to 120″ or bigger.

In addition to the projector and screen you’ll need a streaming device. You can stream a variety of ways. The ideal is via a streaming stick like a FireTV or Google Chromecast. Other popular devices such as Roku and Onn may be good choices as well. If you don’t already have one or are considering having one dedicated for the purpose but want to maintain portability, checkout our list of the best streaming devices for travel.

One other really interesting option to consider is a projector with a streaming device built in. There are even portable projectors with batteries and built-in streaming so you don’t need to bring several difference devices. While there are some limitations, and they tend to be pricey, they make the ultimate portable projectors.

Of course you’ll also need your favorite streaming service to watch on the go as well. This can be as simply as having your Netflix or Amazon logon. However, if you are using your project to go tailgating and don’t currently stream exclusively, you may want to check out our cordcutters guide to tailgating. Streaming sports at a tailgate isn’t as straight forward as most of your home entertainment.

Of course you’ll need power for your project and streaming device, unless you have a projector with a battery. Projects can be pretty power hungry. Remember earlier when we mentioned choosing the right brighness/lumens? Will that choice can have an impact on how much power you need.

While an extension cord will reach into most back yards or even cul-de-sacs, those who streaming while camping or tailgating often find they need to bring their own power. In those cases, we recommend bringing a portable battery. Projectors with batteries often are limited to 2-4 hours on the high side. It may be just enough for a movie, but beyond that we find its easier to bring a battery bank with us.

If you do pick a project with a battery, but it doesn’t have built in streaming capabilities, remember you’ll still need power for your streaming device. Some portable projectors may have a USB port that offers power.

The last piece you’ll need is internet. Where you want to use your portable projector will factor in how you get internet and the challenges you may run into.

Internet Where WiFi Is Available

For backyard campers or those using portable projectors at say a hotel or in a neighborhood, WiFi may be available or near by. Your streaming stick (or streaming capable projector) will just need to connect. However, streaming requires a very steady connection to be reliable. You may find that the WiFi in your yard or cul-de-sac just doesn’t reach.

In that instance you’ll want a WiFi extender to bring the signal further out. If you travel a lot you may consider a travel router, which is a device that acts as a WIFi extender but also provides some benefits when using WIFi on the go.

Many campgrounds and even stadiums are now offering WiFi. So it’s possible you will be able to get connected where you want to stream to your projector.

When WiFi isn’t available or its not practical to extend to your location, you will need to consider mobile internet options. There are a few common ways to get internet on the go when WIFi isn’t traditionally available.

Generally the “cheapest” option because it may not require additional components or cost is using your phones personal hotspot. This option is great because it uses your existing phone and data plan. Simply activate your personal hotspot and connect your streaming stick to it. Using your phone for internet is also how you would get internet access in most instances if you are doing screen mirroring.

However, there are a few things to consider when using this choice.

If you travel regularly or if you routinely need travel WiFi on the go, then a cellular hotspot is a great option. They take the best elements of the personal hotspot and in car WiFi, plus you use it lots of other places outside of the car. The cons are that it generally has it’s own data plan, which is another expense and it’s another device to keep up with.

The advantage in the long run is if you need internet outside of the car and independent of your phone you’ll get a lot of benefit out of the device and service. Cellular hotspots are great for internet anytime you travel or on the go, including tailgating, camping and allowing you to avoid paying for internet at hotels.

If you would like to better understand the difference check out our blog comparing personal hotspots and a cellular hotspots.

If you want to enusre you will have reliable WIFi when streaming to your rear entertainment system then the Go Connect Go Travel Pro is the device for you. Go Connect devices are really easy to use. In fact, if you can navigate streaming services, you can use our devices. And they do a lot more than other cellular hotspots.