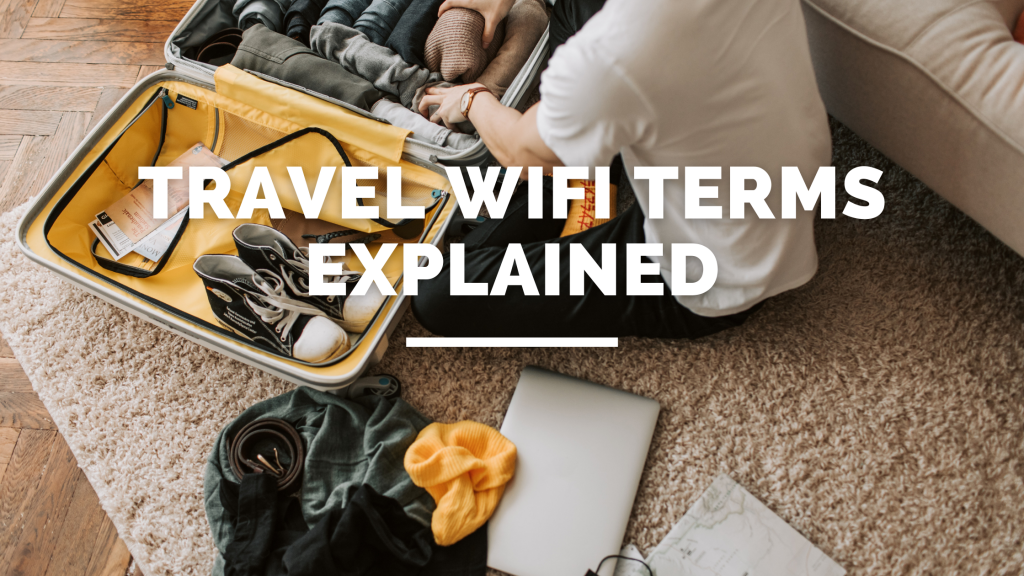 If you are like most American’s your life resolves around WIFi and the internet. You’ve likely heard terms from your internet provider like bandwidth, gigabytes/gigabits (GBs) and many others. However, the world of internet on the go, often referred to as travel WiFi can be completely different. The same terms may even have a slightly different meaning.

Here at Go Connect we are all about demystifying the travel WiFi experience. So we put together this handy list of terms and their specific travel or on the go meaning.

A hotspot is a general WiFi terms meaning a location where you can access WiFi, which generally implies internet access. However, when traveling a hotspot may actually relate to a few things – though they generally have a qualifier to help you distinguish them from a fixed hotspot offered by a business such as a hotel, airport, restaurant, coffee shop or other locations.

A cellular hotspot is a device that makes a private WiFi connection out of cellular data. This is generally a standalone device that regular travelers use to provide their own internet access without needing to worry about the availability, reliability or security of hotspots when on the go.

Small version of cellular hotspots are commonly referred to as Pocket WiFi or Portable WiFi.

Travel WiFi simply refers to WiFi you may encounter or bring with your when traveling. This differs from “home” or “office” WiFi in that it is not fixed or controlled by you, or in the case of office by your company. Travel WiFi is unique because the availability, reliability and security of WiFi or internet access is not as predictable.

While portable and pocket WIFi are forms of travel WiFi that you bring with you, the idea being that it helps address some of the availability, reliability and security challenges of WiFi and internet access when traveling.

Portable WiFi and Pocket WiFi are forms of travel WiFi that is designed to be highly portable. The goal of portable or pocket WiFi devices are that they WIFi you can easily bring with you to make availability, reliability and security of WiFi when traveling more predictable.

Pocket WiFi specifically came from the the idea being it’s small enough to fit your in pocket. While many portable, even “pocket” WiFi devices don’t actually fit in your pocket, the concept is clear.

A cellular hotspot is a device that makes a private WiFi connection out of cellular data. This is generally a standalone device that regular travelers use to provide their own internet access without needing to worry about the availability, reliability or security of hotspots when on the go.

A travel router is a device that makes a private WiFi connection of out a wired or wireless internet connection. This is generally a standalone device that regular travelers take to provide a predictable WiFi network name and security when using hotspots on the go. While some devices termed travel routers offer cellular connectivity as an option, generally speaking they refer to devices that use WiFi provided by travel locations such as hotels, Airbnbs, airports, coffee shops and conference centers.

Captive Portals are the popups you get that prompt you to login or provide additional information prior to using the Hotel, AirBnb or other locations WiFi when traveling. Captive portals are very common at hotels, coffee shops, airports and other locations when you access a travel WiFi hotspot.

Captive Portals allow for more advanced security with WiFi. Unlike simple password like you might find with your home WIFi, or no password where there are no restrictions at all, a captive allows businesses the opportunity top secure their WiFi using things like names, room numbers, account numbers or other custom information. In addition, captive portals can present terms and conditions or other legal disclaimers they need users to accept prior to using their internet.

Captive portals are also often the primary reason why many smart and WiFi enabled devices do not work when traveling. However, there are plenty of work arounds and ways to resolve issues with captive portals.

VPN stands for virtual private network. A VPN service will add an additional layer of encryption to your internet use. It secures the connection and creates what is called a “tunnel”. Because the network the VPN creates is private, it will hide and isolate your information and internet contents from other devices or users on WiFi. If you have ever used VPN or secure access for your work, you’ve likely used a VPN before.

Semi-private WiFi refers to a WiFi network that is not open to the general public, but not completely privately controlled by your. Examples of semi-private WiFi would be WiFi provided by hotels. While semi-private WiFi may offer some level of security, they are generally not considered “secured” by most standards.