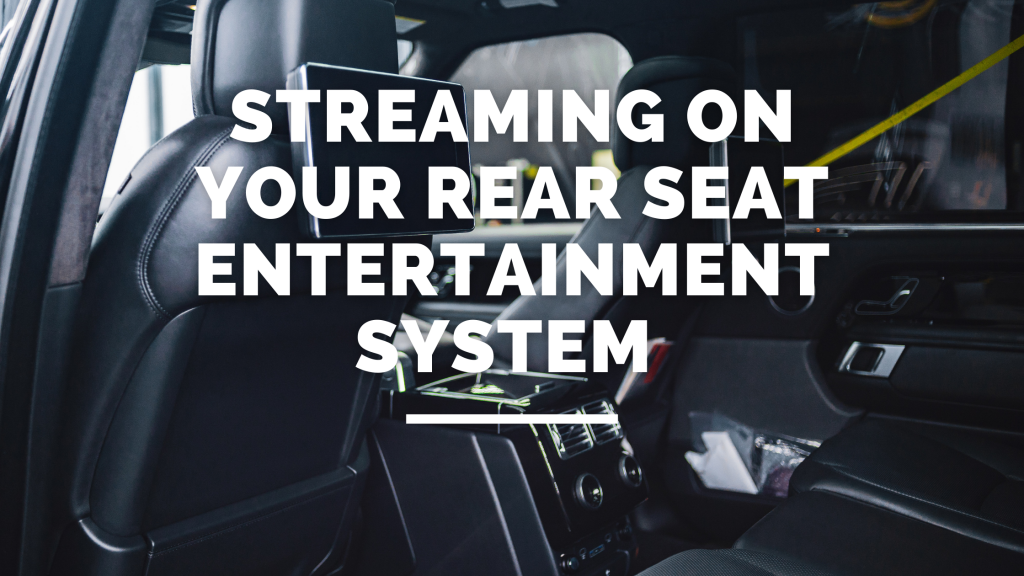 The great American road trip. Few activities garner an image so powerful in our minds. Whether it was riding in our parents station wagon to the grand canyon or taking our kids to the beach in a 3 row SUV. The later story is more true to modern households as the vast majority of American families have purchased some form of SUV. For many with kids, a rear entertainment system was a pretty great accessory option.

When vehicles began including these systems or when people added them all through the 2000s and 2010s it complete changed the road trip. Television helped keep the kids entertained. All you had to do was pack up a sack of DVDs and head out.

While for many American families this still holds true and there are dozens of fantastic DVD rear seat entertainment systems available, they generally are not known for is being up to date with technology. Many only had DVD players, even as households began buying Blu-Rays. Now many have Blu-Ray players, even though most American’s get all of the video from streaming rather than physical discs.

What you may be surprised to know is that you can easily stream your favorite shows to your vehicles rear entertainment system. You need a few things to make it happen. There is even a good chance you already own or have everything you need.

Why Stream To Your Rear Entertainment System

You may be wondering if this is even worth pursuing. Perhaps you don’t have a rear entertainment system and are deciding whether it’s an option to add or if you should get one with your next purchase. If you are like many American’s you’ve already begun giving up on buying physical discs. In fact, your kids may have even moved on to tablets or phones and watching YouTube on those devices.

So why bother going through the effort? The reality is there are a number of times we’ve found it’s still great to have streaming on your rear seat entertainment system.

Even when you don’t have kids there are some fantastic opportunities to use the rear seat entertainment and streaming stick.

There are probably many more, these are just some of the many ways with and without kids we’ve used the ability to stream in our SUV.

What You Need To Stream To Your Rear Entertainment System

There are a few basics you need to stream to your rear entertainment system. The core basic components are:

These core components are necessary no matter how you go about it. As you continue to read though you’ll see that there are multiple ways you can connect.

A core components to streaming to your rear entertainment system is well, the system itself. It doesn’t matter if your system came with the car, was installed after the fact (at a dealership, audio or electronics store) or if you bought a kit you put in yourself. You’ll need a system and it’ll need one of the following features

You may also be able to use a system that has RCA inputs, but you’ll likely need an adapter cable and some video may play at lower quality or not all due to copy protection.

If you don’t yet own a vehicle with a rear entertainment system, be sure your system has at least the following features. Otherwise, you may find it is simply not worth paying for it as an option on a new or used car or as paying to have it installed aftermarket. If you don’t have these specific features, you’ll need to accept you may be limited in how you connect.

There are many different types of rear entertainment systems. Many are built into the car, coming as options when you purchased it. Others are installed by the dealership at or near time of purchase. They can also be purchased from most online and physical electronics stores. Some require or encourage professional installation, others simply plug into a cigarette lighter.

Regardless where you buy it or of how you get your system installed, be sure it has at least an HDMI port.

The next major component you’ll need to ensure you have is a streaming device. You can stream a variety of ways. The ideal is via a streaming stick like a FireTV or Google Chromecast. Other popular devices such as Roku and Onn may be good choices as well.

If you don’t already have one or are considering having one dedicated for travel or the vehicle itself, checkout our list of the best streaming devices for travel.

One thing we have seen reports of is that some older devices, Roku’s specifically, do not work well with some rear seat entertainment systems. This is generally because the Rokus did not understand the unusual resolution of the displays in the in car systems. Unlike TVs which almost always have standard display types and sizes, rear seat entertainment systems vary. If you notice the screen looks zoomed in or not working, you may need to try a different device. Generally speaking Chromecasts and FireTV sticks seem to have the fewest issues.

If you don’t have a streaming stick, or if your rear entertainment doesn’t have an HDMI port but does support phone mirroring or casting you can use your phone. Just know that if you go through route whoever’s phone or tablet is being mirrored won’t be able to do anything else without interrupting the stream.

To use your streaming device you’ll need to locate your vehicles HDMI port (or use one of the alternative methods with adapters). Install your streaming stick in the HDMI port just like you would in your home TV. Secondly you’ll need to locate a USB port for power. In our test vehicle, a GMC Yukon Denali there was an USB port right next to the HDMI port. Both were located in the rear center control console, right above the rear seat AC controls.

Lastly you’ll need to set your input to HDMI. For our tester entertainment system you do that by accessing the video section of the main infotainment controls. In other systems the controls and input selection are on the rear seat screen themselves. Units may also include a remote with input controls.

Chances are though, if you are reading this article you likely already stream at home. There is no reason you can’t use the exact same services and logins on the go.

The last piece you’ll need is mobile internet. The options here are quite varied. Depending on your needs, other uses for mobile internet and your price point there are a lot of potential choices.

Generally the “cheapest” option because it may not require additional components or cost is using your phones personal hotspot. This option is great because it uses your existing phone and data plan. Simply activate your personal hotspot and connect your streaming stick to it. Using your phone for internet is also how you would get internet access in most instances if you are doing screen mirroring.

However, there are a few things to consider when using this choice.

Another common way to get mobile internet for rear seat entertainment streaming in via an in car WiFi system. Your dealer may have sold you (or tried) this feature as an add on. They are also available for purchase and installation from a dealer, audio store or electronics store – or even self install – after you’ve purchased your vehicle.

In Car WiFi can be a great deal in some instances. For example, some companies offer unlimited data for $20 a month. Compared to most dedicated hotspots, or if you consistently go over your phones data or don’t have unlimited plan this can be a great value.

However, there are a few things to consider:

If you travel regularly or if you routinely need travel WiFi on the go, then a cellular hotspot is a great option. They take the best elements of the personal hotspot and in car WiFi, plus you use it lots of other places outside of the car. The cons are that it generally has it’s own data plan, which is another expense and it’s another device to keep up with.

The advantage in the long run is if you need internet outside of the car and independent of your phone you’ll get a lot of benefit out of the device and service. Cellular hotspots are great for internet anytime you travel or on the go, including tailgating, camping and allowing you to avoid paying for internet at hotels.

If you would like to better understand the difference check out our blog comparing personal hotspots and a cellular hotspots.

If you want to enusre you will have reliable WIFi when streaming to your rear entertainment system then the Go Connect Go Travel Pro is the device for you. Go Connect devices are really easy to use. In fact, if you can navigate streaming services, you can use our devices. And they do a lot more than other cellular hotspots.

Start Streaming In Your Vehicle

Once you’ve installed your streaming stick into your vehicles rear seat entertainment system, powered it on and connected it to your mobile internet of choice – that’s it. Start streaming. Your kids will love it. Even kids with tablets or other devices will love the ability to watch their favorite streamed shows during longer car rides. Even around town many kids love being able to watch shows with their siblings and friends while running around.