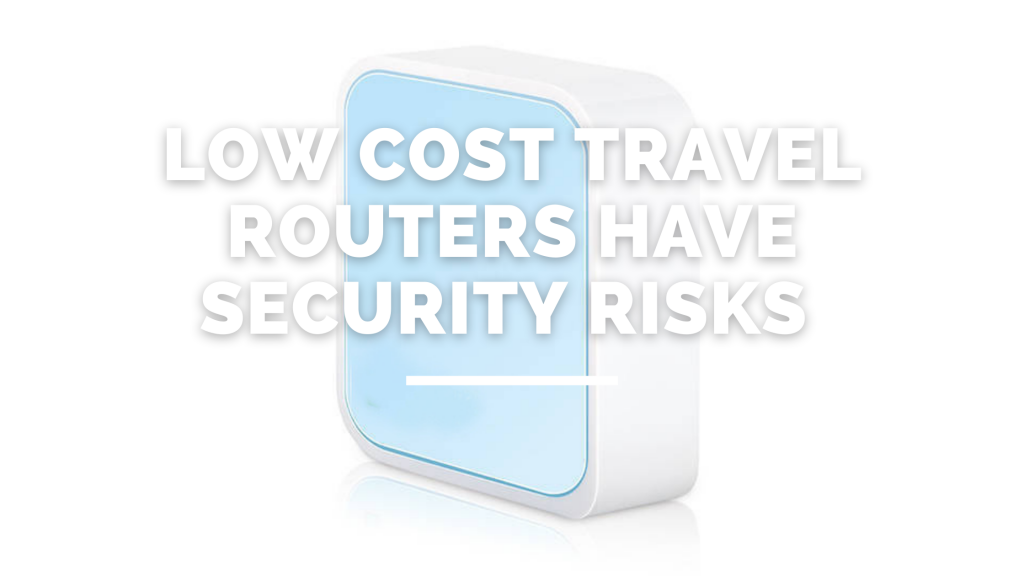 At the end of 2020 Cybernews reported finding a number of inexpensive routers sold via Walmart.com and other channels had a major built in security risk. While travel routers are often promoted as being a way to better secure public WiFi when traveling, this discovery certainly brought about some red flags if you are considering a low cost device to achieve that goal.

The security issue in these routers was that they contained a backdoor built into the firmware of the device. While backdoors can sometimes serve legitimate purposes, if the owner of the device is unaware or them and/or they are exploited, they become a MAJOR security concern.

Worse yet, it turns out this is a very common practice with routers and hotspots built in many foreign countries. It also is highly concerning because that is often not disclosed to the owner.

After learning about these routers with backdoors on Walmart.com we checked a number of the cheap and low cost “white label” routers on Amazon. Sure enough, a number of them had backdoors.

What Is A Backdoor

Just like the name implies, the back door is similar in concept to leaving your houses “backdoor unlocked”. The idea being that its not commonly checked by visitors but allows access to your home to someone without a key.

In technology world it is a way for someone to gain access, usually with full control, to your device. Legitimate purposes can include support, recovering a device with a problem or even government intervention.

However, backdoors are also common for illegitimate purposes. They include hackers, illegal government agents and others who are looking to gain access to your network in order to trick you.

How Do I Know If My Travel Router Has A Backdoor?

Unfortunately it can be very hard for someone who is not a technology expert to find out whether your device has a backdoor. And the more illicit the purpose of the backdoor, the more effort they are likely to go through to hide it from legitimate eyes.

Most backdoors are built into the firmware of the device – which is the very specialized software that runs on it. They are often not easily spotted or easily changed. You generally won’t be able to find a backdoor through the normal user interface that comes with the device.

The best way for the average person to avoid getting a device with a backdoor is to buy it from a known supplier. While a cheap hotspot or travel router from Amazon or other supplies may sound like a good deal, you may get more than your bargained for. Buying your travel router or hotspot from a mainstream product manufacturer and from a reliably retailer is important.

We’ve previously published a blog article that talked about how free VPN services were hijacked, allowing hackers to steal a lot of user information that users thought was secure. A backdoor on your travel router could easily allow for a similar exploit. In fact, a backdoor could allow hackers to not only gain access into your network, but easily fool your device into still believing it is a secured.

We recommend the following considerations:

If you want a travel router that accounts for all of these risks and concerns, only Go Connect’s line of travel WiFi products does it all. We have our own firmware with no backdoors. In addition our available SmartSecurity never uses free VPN end points.

The only decision you’ll need to make is whether you want the optional cellular version. If you do choose cellular, you won’t even need to decide between whether to use public WiFi or cellular, our device will connect to both. It even manages the connection for you so you don’t need to decide when you switch for reliability or whether to use the WiFi to save data.

Our goal is to provide a product line that focuses on getting you and keeping you connected, so you are free to surf, stream or work. And if you decide to stream instead of work, don’t worry, we won’t tell.