How Much Cellular Internet Data Do I Need?

How Much Cellular Internet Data Do I Need? 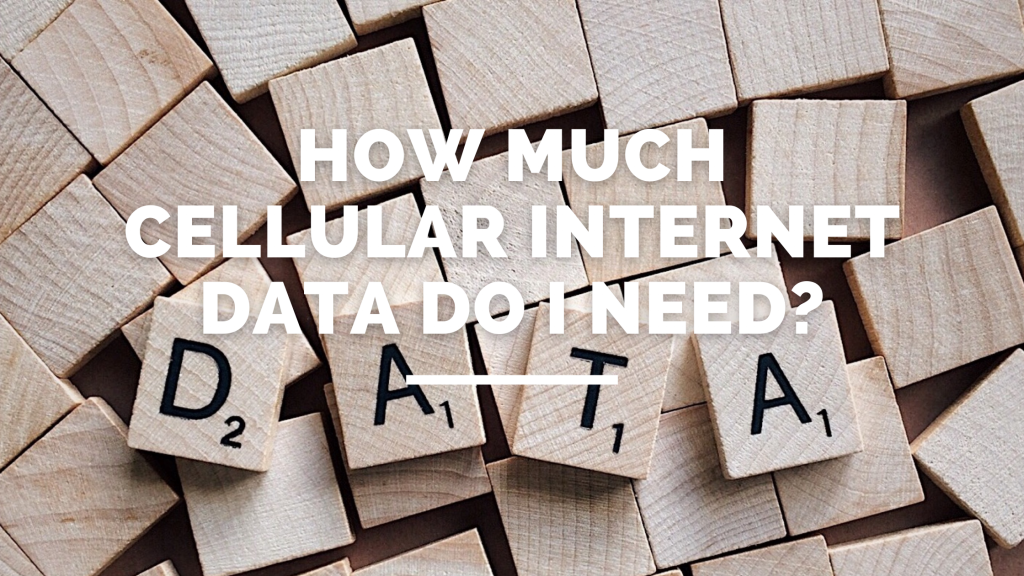 When considering buying or switching cellular internet data plans or purchasing a plan with a cellular hotspot device, the question often comes down simply to “How Much Data Do I Need?”. Of course, there are lots of other considerations for cellular internet like coverage, performance and reliability. After those three, it’s the next biggest question. And if you are paying a lot to a carrier, it might be THE question.

While plans and providers are increasing the amount of data included with plans, you can still save yourself a lot of money, or at least heartache, by picking a plan that matches the data you are most likely to consume.

To keep things simple, everything in this article will be expressed in GBs since that is how most data plans and packages are sold. It will also make comparing figures easier. Where possible we will express the data in both GBs per hour, but also hours (or partial hours) per GB. The latter will make figuring out, for example, how much data is consumed by 8 hours of Zoom meetings, easier.

Of course these are just general estimates. Your exact data consumption may vary greatly from this depending on how often you use it, quality settings, available bandwidth and any devices or services that are consuming data in the background. All amounts are per device, so having multiple users or devices performing different activities will generate concurrent data usage.

Generally speaking for MOST cellular internet users if you are going to consume a lot of data, it’s going to be for streaming while traveling. This is probably not a big surprise to most users. What does seem to surprise people though is what counts as streaming. Sure, Netflix is an easy one. But “streaming” in a more broad sense and the data consumed by it is pretty similar from any service that delivers video: Netflix, Disney+, SlingTV. But it will also include videos watched on Facebook, Instagram and YouTube. Even reels, those short 15-30 second videos that are very popular on social media are considered streaming and consuming data as such. The short videos may leave you thinking the data consumption is low, but the endless stream of video play over the course of an hour will consume a fair amount of data.

According to Netflix, this is the amount of data consumed by streaming:

Data used per hour, per device:

Netflix has additional options to limit data consumption in their mobile apps. It generally cuts this numbers in half by optimizing the video stream. However, it’s important to note that is only for streaming through the mobile app. Using a Roku, Chromecast or SmartTV will not benefit from this optimization.

Of course, you can assume similar data consumption from the other services. Netflix is very good at optimizing their performance so if anything, you should expect other services to be on the higher end of the data consumed.

With the increase in remote work as a trend has some an increase in the need to conduct work meetings via Zoom. When traveling or digital nomading, the next most common consumer of data on cellular internet plans is often Zoom meetings.

According to a recent study Zoom consumes the following data.

Of course you can expect similar data consumption from other video conferencing platforms like GoToMeeting and WebEx.

High quality audio streaming can consume a surprising amount of data. Similarly, Smart Assistants are generally powered by streaming audio it hears to a server and then playing back an audio recording.

The data consumed to download is generally equal to the size of what you are downloading. This comes into play with very large files like games, which can consume 50-100GB of data to download and quickly blow through any high speed data allotments.

Another unexpectedly heavy consumer of data is file sharing or syncing services. The amount used will vary greatly on the size of the files, the frequency of change and the total number of files shared. You can generally assume an average 5% of the size of your files stored will be updated or sync’d. If you have 100GB of files stored in Google Drive, DropBox or similar services you likely will use .5GB per month. Of course, the usage can vary WILDLY so this is just an “average” rule of thumb.

You can generally get 100-1000 pictures per GB depending on the quality of the pictures viewed. Pictures stored at full quality right off of a phone or SLR camera will consume the most. Pictures optimized for web viewing will often consume the least.

If you are considering an “unlimited plan” so you don’t need to worry about the amount of data you consume, they can be a great option. However, we highly recommend you make sure you check the fine print. MOST unlimited plans, especially those sold by the major cell companies, only give you a specific amount of “high speed data”. For most high data activities like streaming and video conferencing, the data provided once you get passed your high speed data may not be sufficient. The good news there are real unlimited plans available now from a handful of providers, including Go Connect. While there may still be limitations, you generally will never hit a “cap” that prevents you from streaming or joining a video conference.

We have an oncoming blog post where we dive further into cellular internet, including coverage, speeds and data plans.